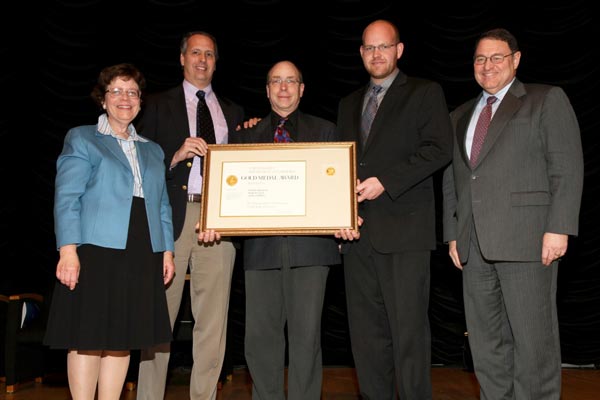 An interdepartmental team from ITS and the NTIA Office of Spectrum Management (OSM) received a Gold Medal Award in the category of Scientific/Engineering Achievement for work performed in FY 2012. Acting Department of Commerce Secretary Rebecca M. Blank (far left) and Assistant Secretary for Communications and Information Larry Strickling (far right) presented the Gold Medal Award to Robert Sole of the Office of Spectrum Management and Frank Sanders and John Carroll of ITS.

The team was recognized for identifying nationwide WiMAX radio interference to National Weather Service (NWS) NEXRAD safety-of-life weather radars by providing interference diagnostics to NWS, and providing solutions for the problem. The affected radars warn U.S. citizens and airports of severe weather events; the group worked with NWS and industry to identify the problem and find technical solutions to it. The group's accomplishment ensures that NEXRADs across the country will function without interference while allowing continued deployment of new broadband services across America.