Institute for Telecommunication Sciences / About ITS / Awards / 2013 NPSTC Awards

The National Public Safety Telecommunications Council (NPSTC) honored two ITS employees at their May 14, 2013 Committee Meeting in Washington, D.C.

ITS engineer Andy Thiessen received the 2013 DJ Atkinson Technical Award. This award was created in 2012 to honor the work of the late ITS engineer DJ Atkinson. It recognizes individuals and/or organizations that have demonstrated exceptional technical support to NPSTC and the public safety communications community. Andy was recognized for "tirelessly [working] to support public safety communications through his work at the Public Safety Communications Research Program (PSCR) and as NPSTC Vice Chair of the Technology Committee," and for his multiple efforts to gather user requirements for broadband during the prior year.

Kathy Mayeda, a member of ITS's administrative staff, and her counterpart at the National Institute of Standards and Technology/Law Enforcement Standards Office (NIST/OLES), Cindy Stanley, both members of the PSCR Program, received Letters of Recognition acknowledging their dedicated assistance and support to NPSTC and the public safety community. 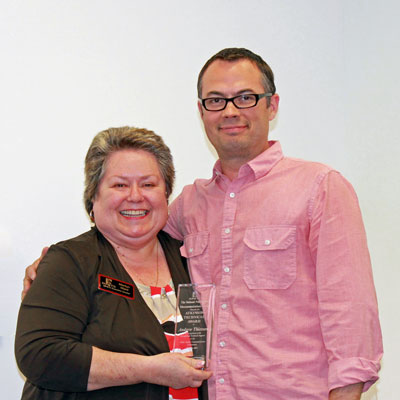