Boulder, Colo. - Three staff members of the National Telecommunications and Information Administration's (NTIA) Institute for Telecommunication Sciences (ITS) in Boulder, Colo., received a group Silver Medal for Scientific/Engineering Achievement from the U.S. Department of Commerce at ceremonies in Washington, D.C., on Wednesday, November 8, 2006.

Comprised of a vehicle, measurement hardware, and software, the system can measure how much of the radio spectrum is being used. It can also determine sources of radio interference. It has already aided the Federal Communications Commission, the Army, the Navy, the Air Force, the National Weather Service, and the Federal Aviation Administration.

The Department of Commerce has operated vehicle-mounted radio measurement systems since the 1920s. The first modern system was developed by ITS in the mid-1970s. This year's award-winning design is the fourth generation. 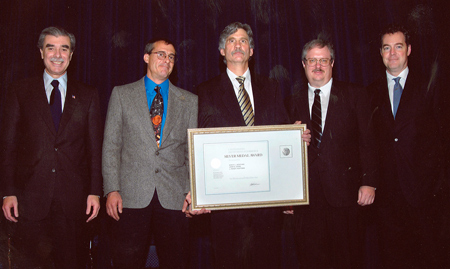