A cross-divisional team of ITS and NTIA staff was selected in FY 2010 to receive a Department of Commerce Silver Medal in the category of Scientific/Engineering Achievement. The group was recognized for swift and accurate measurements, tests, analysis, and documentation enabling them to identify the cause of radio interference to safety-of-life air traffic control radars at nearly half of the radar sites nationwide. The ITS engineers provided diagnostics to the agency operating the radars to identify the problem, and then provided a technical resolution for the problem. The affected radars give microburst warnings to air traffic control. The solutions developed by the group involve changes in the design, testing, and deployment of interfering transmitters. The group's accomplishment will ensure that radar microburst warnings at airports across the country continue to function without interference. This accomplishment supports the Commerce Department's goal to promote U.S. innovation and industrial competitiveness by advancing measurement science and standards that drive technological change. 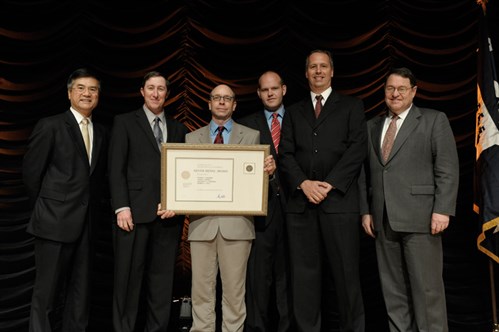