Institute for Telecommunication Sciences / About ITS / Awards / 2010 Bronze Medals

Three ITS staff were awarded Department of Commerce Bronze Medals for their outstanding work in FY 2010. Ms. Carol VanStory received a Bronze Medal for Personal and Professional Excellence  in providing customer service to internal and external clients, as well as automating and improving financial reporting and accuracy. As a result of her efforts to resolve procedural differences between federal agencies, ITS realized $5 million in new revenue from other federal agencies; her accurate analysis and timely financial reports prevented budgetary shortfalls in two divisions. Mr. Robert De Bolt received a Bronze Medal for Scientific/Engineering Achievement in recognition of his work developing the Communications Systems Planning Tool (CSPT) that rapidly combines raw population data from Census sources with radio propagation coverage data using unique algorithms developed by Mr. DeBolt. The combined data is used to rapidly generate a user-friendly raster-based graphical representation that shows the number of people reached by a radio transmitter at a much greater level of accuracy than was previously possible. Dr. Carolyn Ford received a Bronze Medal for Scientific/Engineering Achievement in recognition of her initiative and leadership of the Public Safety Video Quality (PSVQ) team, which developed a working group and a User's Guide to help Public Safety (PS) agencies match their video needs to appropriate specifications, and to provide a communications framework between PS agencies, researchers and industry for the development and dissemination of past, current and future research. 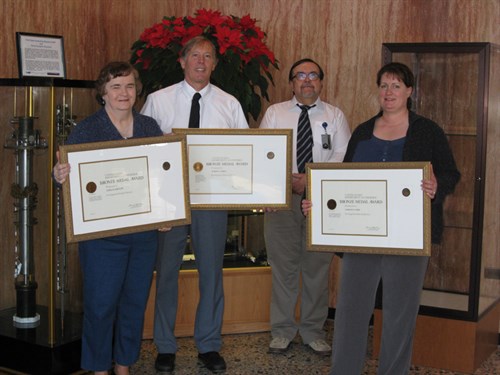